Proposed improvements in specific park areas aim to make Freeway Park more welcoming, delightful, and successful in the ways it was originally intended to be (see below). The following is a brief summary of challenges and design solutions for four park areas where we see distinct potential to improve the park experience. Each section below has details about the proposed park improvements.

The Upper Lawns area serves as a neighborhood park for the surrounding apartment buildings and residents of First Hill. It is the best place in the park to lay a picnic blanket or throw a ball. Today, it is tucked away, usually quiet, and isolated from the Convention Center next door. Some areas of the Upper Lawns are dark and overgrown. 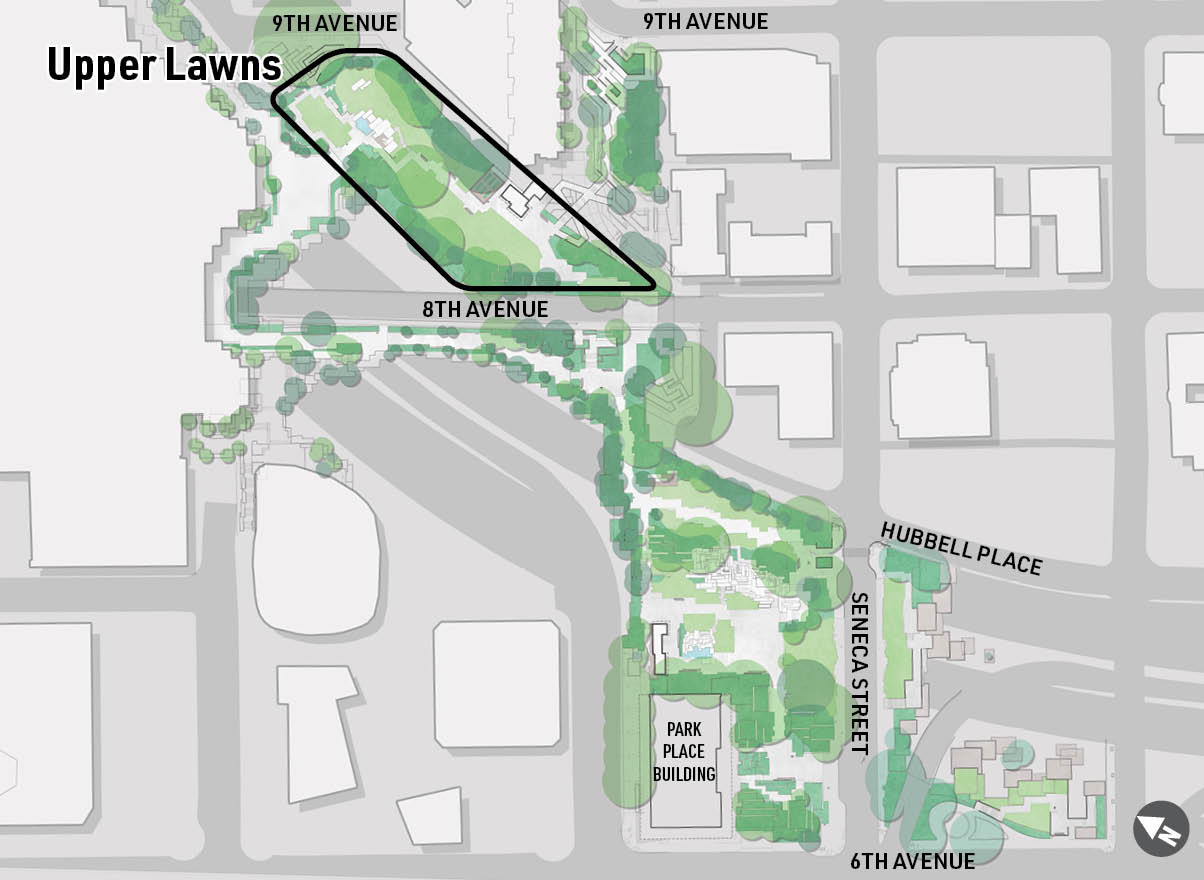 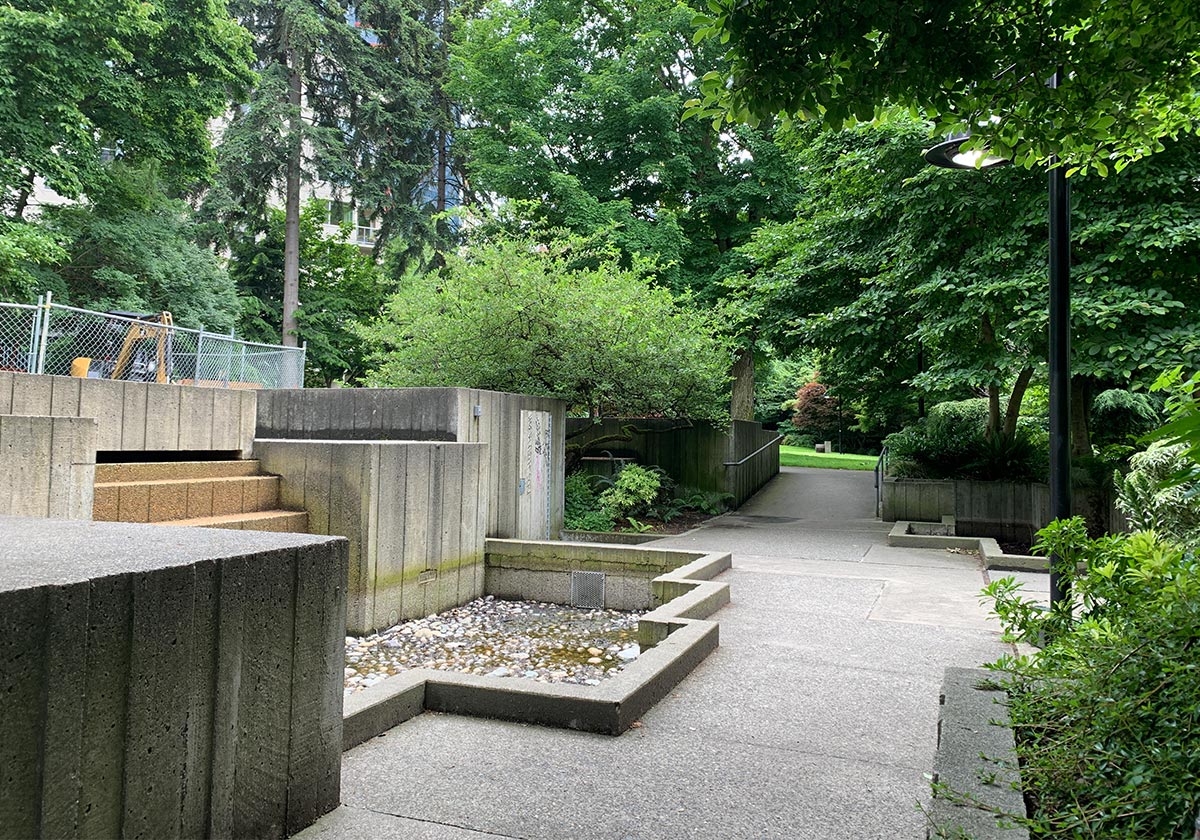 Improvements in this area would enhance the character and use of the Upper Lawns space to make it better connected to the rest of the park, more comfortable and functional as a neighborhood park, and inviting as a place for kids to play. Possible improvements include: 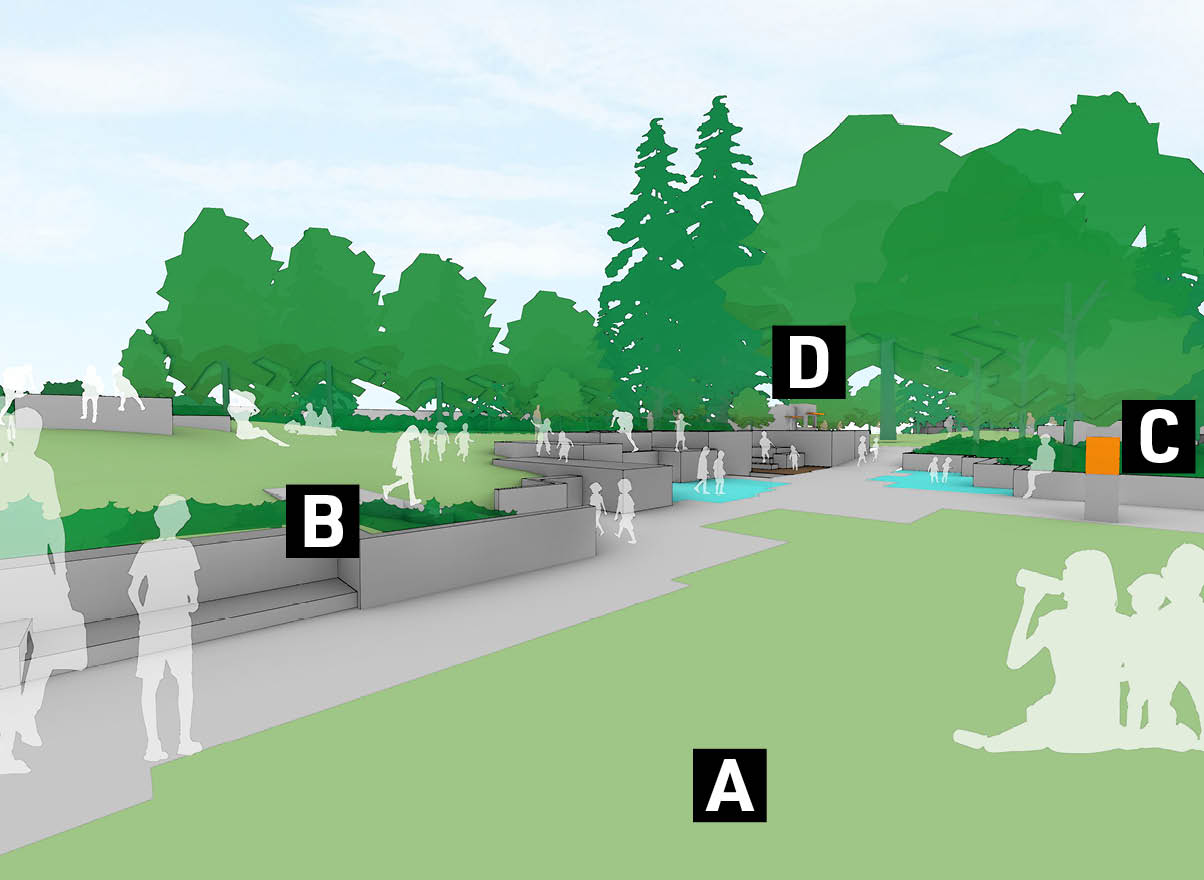 Pigott Corridor is a key connection into Freeway Park from the First Hill Neighborhood. Designed years after the park opened, it is now an integral park circulation route. Throughout the day, it is full of people using the park to get from First Hill to Downtown, but poor visibility makes the corridor uninviting for those unfamiliar with the park. 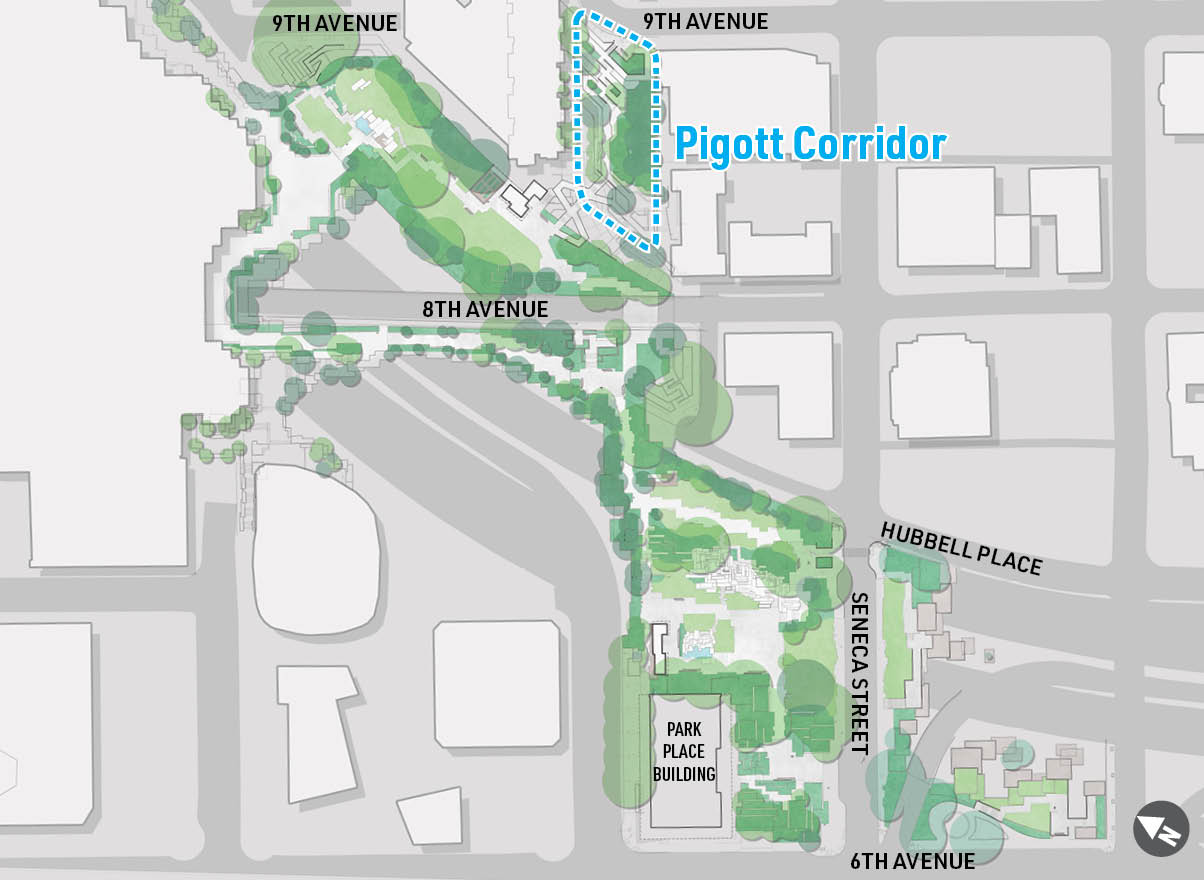 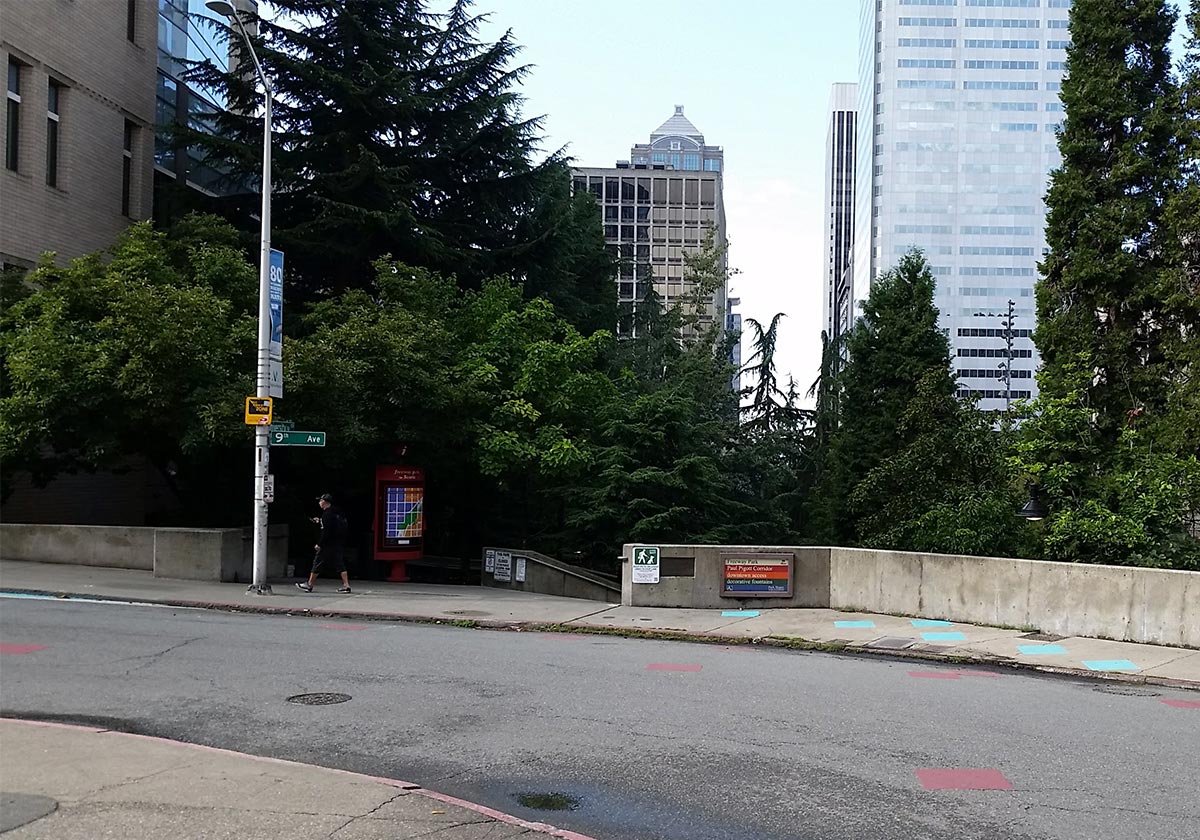 Improvements are focused on creating a welcoming park entrance and overlook at the top of the Corridor with views to Puget Sound. Possible improvements include: 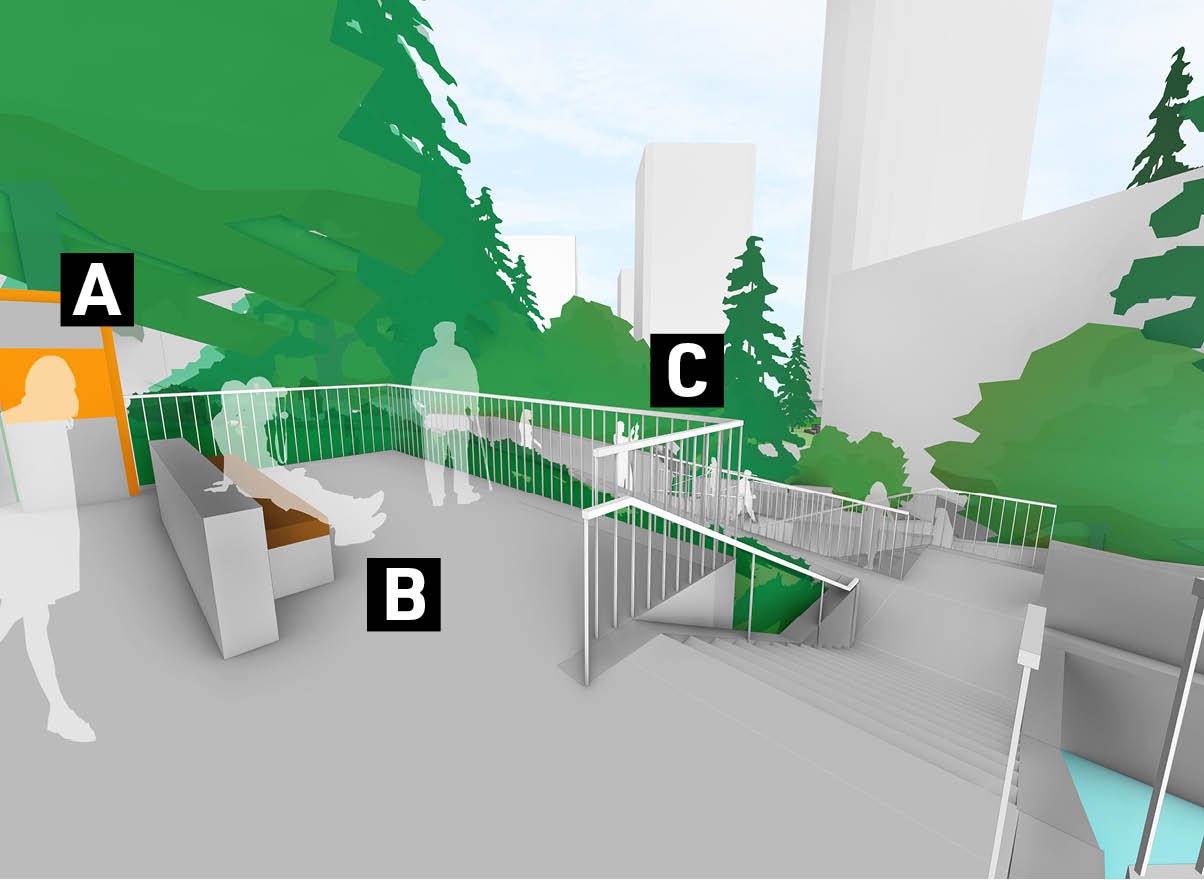 The 8th Avenue Entrance is centrally located in Freeway Park, but nearly invisible. The stair down to the park has many blind corners and is hidden by high walls and evergreen trees. Every day, hundreds of people pass over the park walking on 8th Avenue, and more people are expected with the addition of new housing on First Hill. 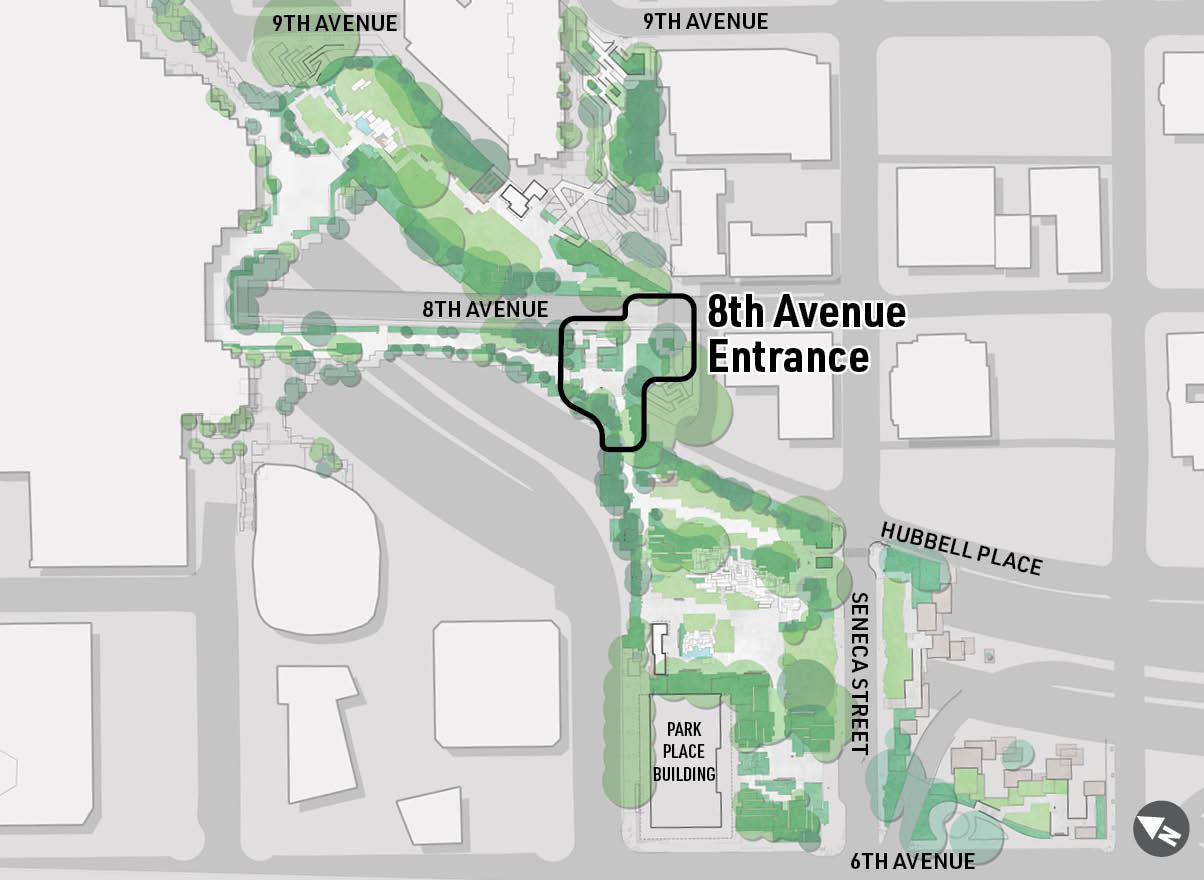 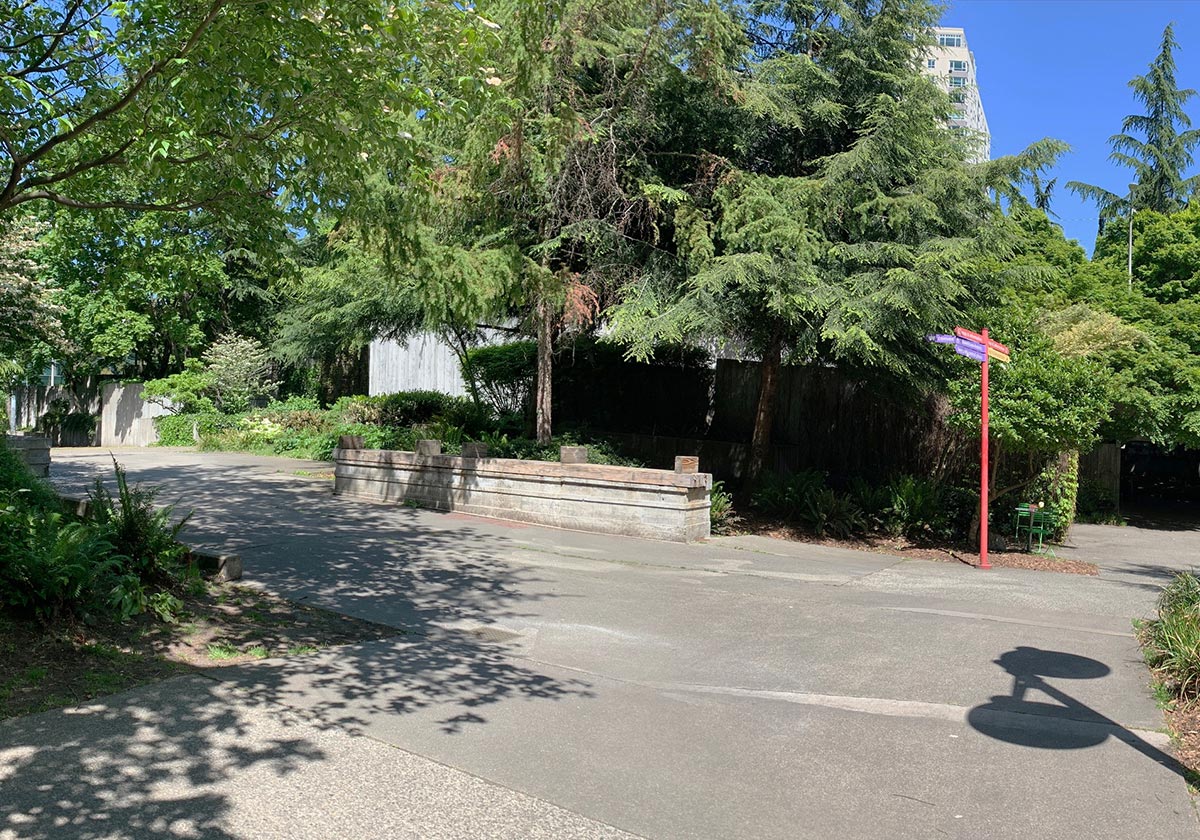 Improvements in this area are focused on inviting more people into the park and helping them to get oriented. Possible improvements include: 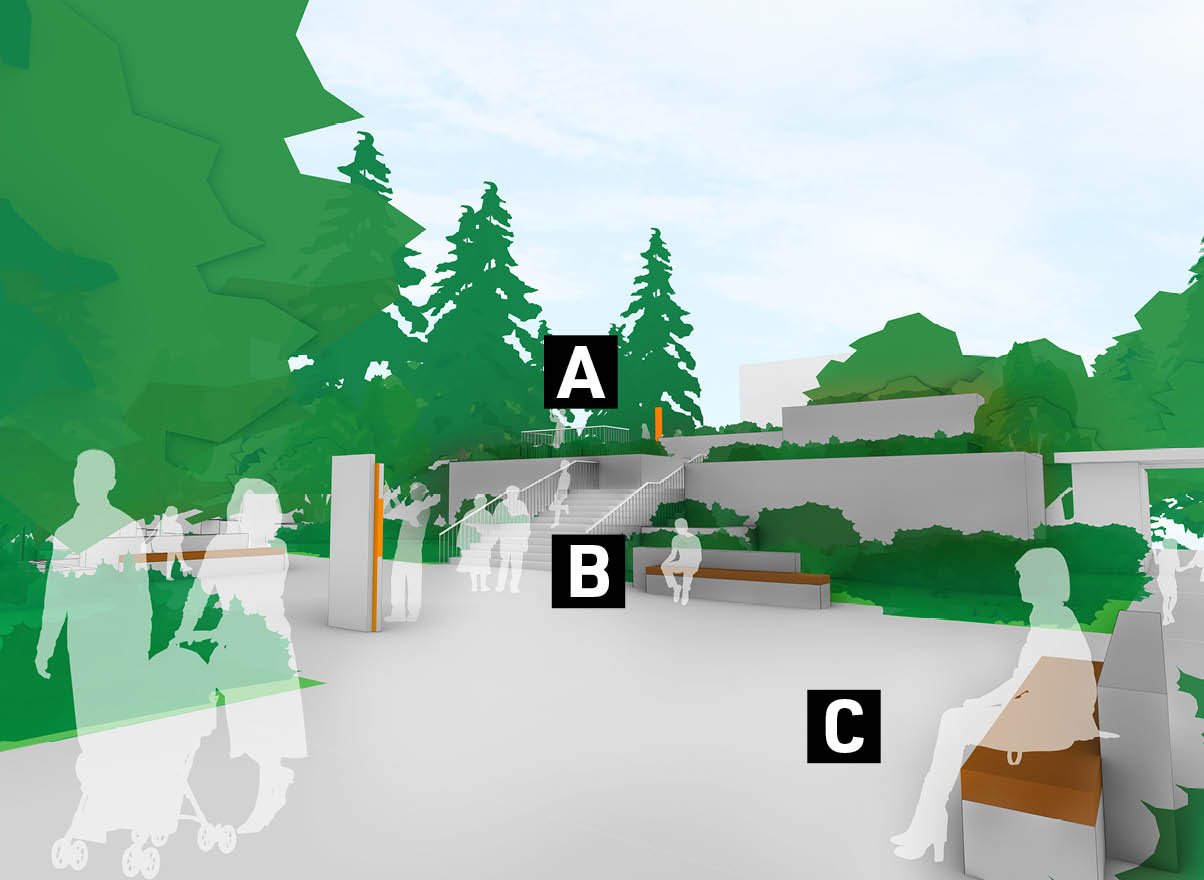 Seneca Plaza is the iconic heart of Freeway Park, home of the Canyon and Cascade fountains, and the center of activity for programming and events. It is the park space closest to downtown and the most dramatic and adventurous landscape in the park. The fountains are no longer used as they were intended—as interactive features—due to maintenance challenges, difficult access, and too much shade from mature trees. Large areas of the plaza have become unappealing or unusable, and perimeter planting obscures desired views. 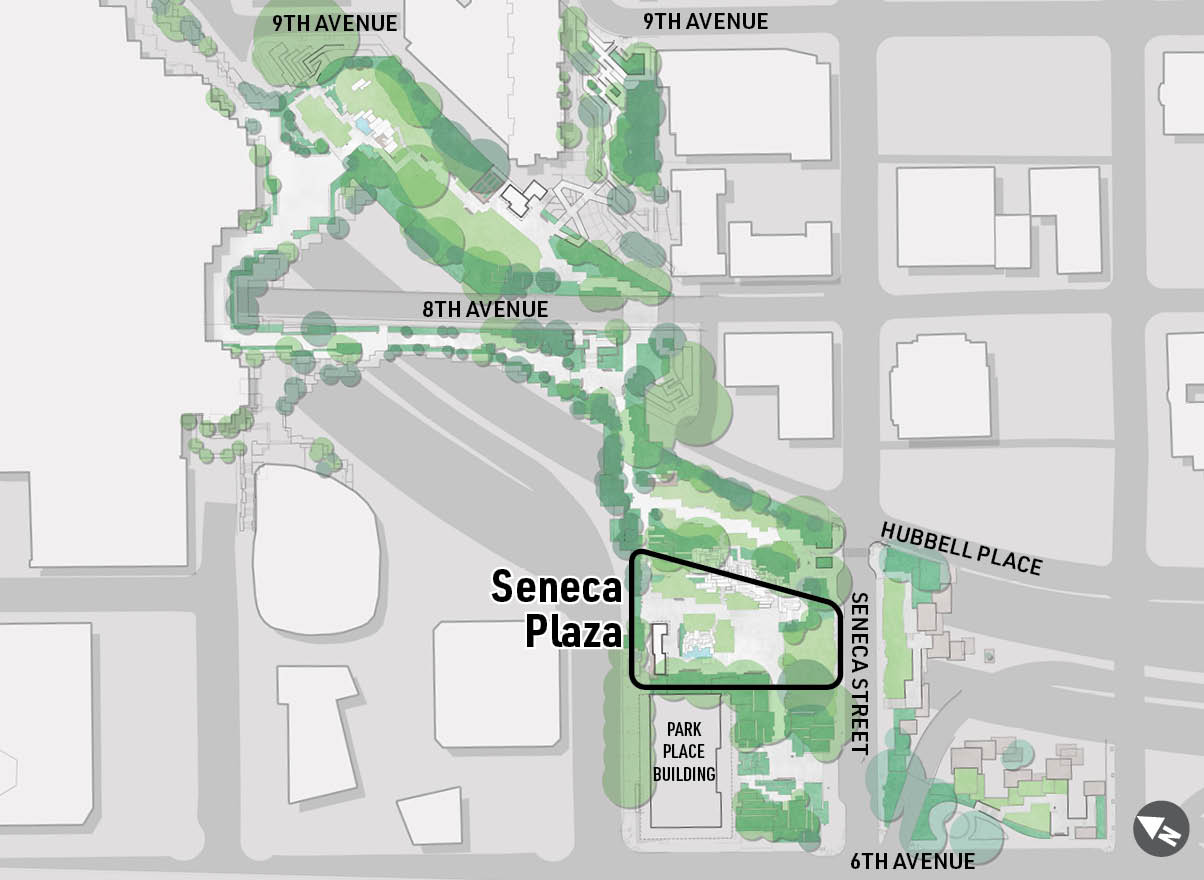 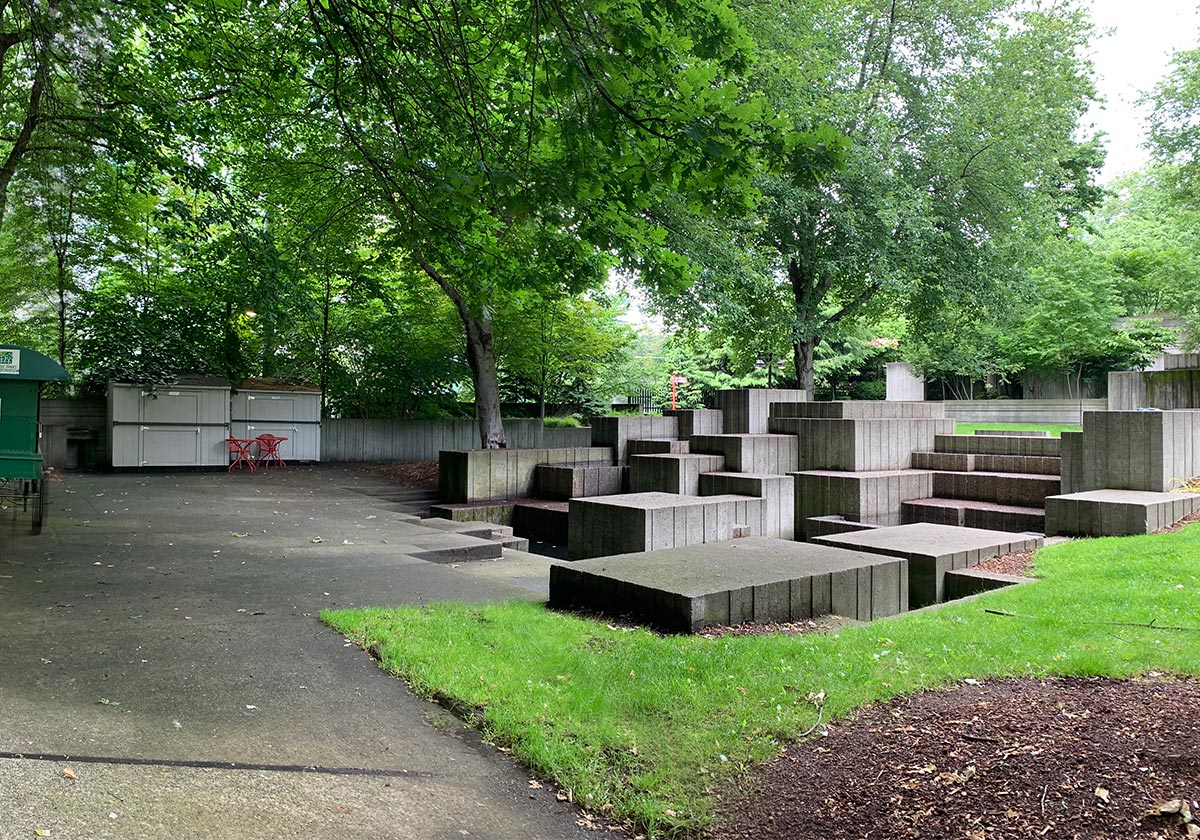 Improvements are focused on encouraging exploration and play, improving the fountains, making the space more accessible, and supporting activities and events. 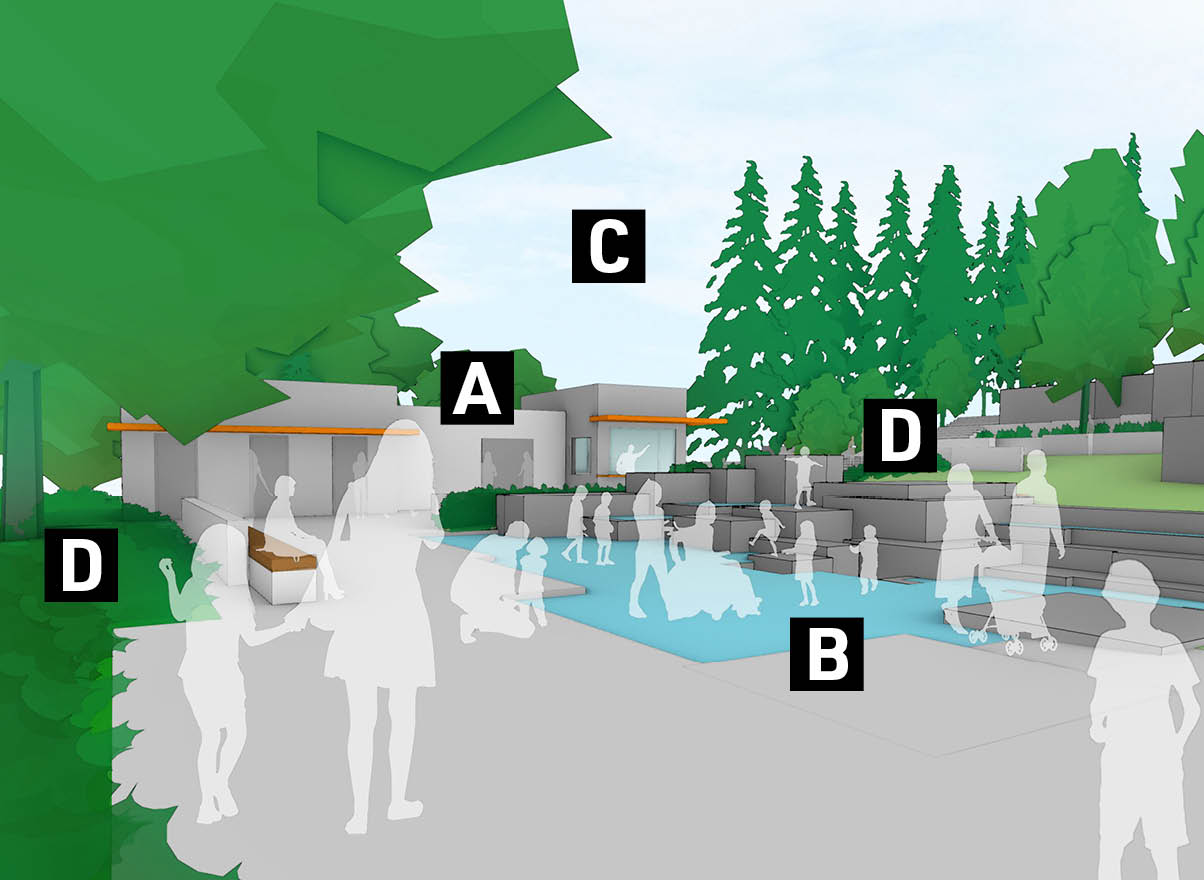 NEXT: What’s Next? PREVIOUS: Park-Wide Improvements